This paper puts the system of international investment law into its historical context, examines economic data as well as most recent statements of states on inequalities in international investment law. It examines inequalities between foreign investors and states, between developed and developing states as well as between foreign and domestic investors. It shows that each dimension of inequality has its own raison d'etre and proposes ways to tackle them in the context of today's political and economic realities.

First, this paper asserts that the international investment law's asymmetric model giving the foreign investor only rights and the host state only obligations no longer reflects the new economic and political realities. The equilibrium between corporate and state actors has significantly shifted and international investment law should be reformed accordingly. The existing model furthers the accumulation of wealth and capital in the Global North and the concentration of corporate power.

Second, the paper shows that in theory, both developing and developed states should be able to equally benefit from international investment agreements. However, in practice, this system disproportionally benefits states in the Global North (capital-exporting states, law firms and arbitrators) while those in in the Global South (primarily developing States) are struggling to find expertise and resources to cope with the influx of investor-state disputes.

Third, the original idea that host states may discriminate against foreign investors is still valid in many cases. However, states are increasingly concerned about the less favourable treatment of their domestic investors, compared to foreign investors, both on procedural and substantive levels.

Finally, the paper recommends several measures to reduce inequalities in international investment law. Reform of the system should tackle the lack of accountability of economically powerful corporations, enduring legacies of colonialism in economic development, as well as give states a greater say on their public policies aimed at protecting human rights, environmental standards, strengthen the rule of law and reduce inequalities.

More specifically, the paper proposes to give greater prominence to the law of host states as applicable law. Further, to widen the inclusion in international investment agreements obligations of the investors related to labour rights, human rights, environmental standards and corruption. It also calls for more effective mechanisms allowing states to assert claims and counterclaims against investors and for measures to reduce the cost and length of investor-state disputes. Finally, it emphasizes the need to strengthen the capacity of states to avoid and better handle investor-state disputes. 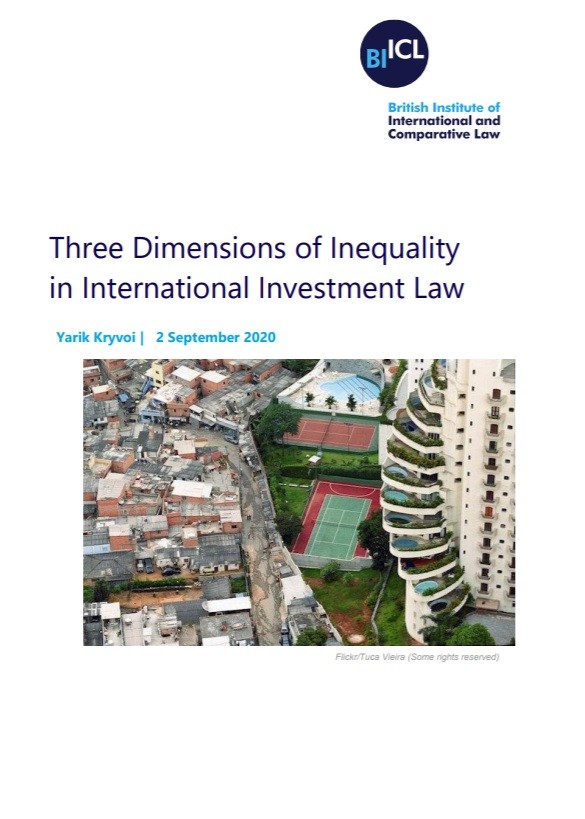