Since its inception almost 50 years ago, the Antarctic Treaty System has evolved to provide a stable and remarkably effective regime for management of the coldest, driest and windiest continent on earth. New challenges to this legal regime are now posed by contemporary problems such as climate change, tourism, and fishing and whaling in the Southern Ocean. For State Parties to the web of treaties that make up the Antarctic system of governance, the 21st century brings new demands for environmental protection while ensuring reasonable access for scientists and tourists alike. The papers in this collection were presented at a conference organized by the British Institute of International and Comparative Law and the United Kingdom's Foreign and Commonwealth Office to coincide with the Twenty-Ninth Meeting of the Antarctic Treaty Consultative Parties held in Edinburgh in June 2006. The authors, experienced Antarctic 'watchers', discuss their views on:

Liability of operators and their States for environmental damage

Included with these scholarly papers are all the international agreements that make up the Antarctic Treaty System along with the Measures, Decisions and Resolutions of the Twenty-Ninth Consultative Party Meeting and the Edinburgh Declaration supporting the scientific research of the forthcoming International Polar Year starting in March 2007.

The collection provides an accessible analysis of the legal and environmental issues for Antarctica in the first decade of the 21st century for government officials and advisors, scholars, students, legal practitioners and scientists. 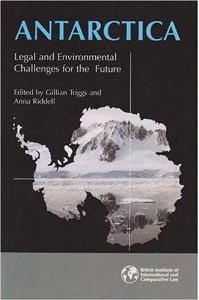