The EU (Withdrawal) Bill, A Rule of Law Analysis of Clauses 1 - 6

This Report sets out the Bingham Centre's Rule of Law analysis of clauses 1 to 6 of the EU (Withdrawal) Bill, to inform the House of Lords Committee Stage consideration of those clauses.

The Bill's purpose is to protect the Rule of Law as the UK withdraws from the EU. It repeals the European Communities Act ("ECA"), the legal basis for EU law having effect and supremacy in UK law, with effect from the date of the UK's exit. However, it aims to ensure legal continuity, certainty and stability for individuals and businesses by converting EU law as it stands at the moment of exit into UK law, so that the same rules and laws will apply on the day after exit as the day before. This means maintaining existing legal protections for people's rights. It will then be for elected representatives in the Westminster or devolved parliaments to decide whether or not to keep or change those laws after full democratic scrutiny and debate.

The Report analyses the provisions of clauses 1 to 6 of the Bill against the Government's own Rule of Law objectives for the Bill, to ascertain whether it meets those objectives or needs improvement. The Rule of Law analysis uses the Rule of Law Checklist, containing internationally agreed benchmarks and standards, to help assess the Rule of Law compatibility of the clauses of the Bill. The analysis has been informed by the work of the Expert Working Group on the Bill, convened by the Bingham Centre in collaboration with the Constitution Unit and the Hansard Society, which has met several times since October 2017 to consider the most significant Rule of Law implications of the Bill and to generate informed discussion of those issues both in Parliament and amongst the wider public. The Report is a report of the Bingham Centre, not the Expert Working Group. It is not concerned with arguments about whether the UK should or should not withdraw from the EU. It proceeds on the assumption that the UK will withdraw on 29 March 2019. It takes account of the work of the House of Lords Constitution Committee ("HLCC") and of amendments already tabled for Committee Stage.

Clauses 1 to 6 engage a number of overlapping and related Rule of Law standards clustered under the general principle of "legal certainty". These include the accessibility of the law; its clarity; its foreseeability; its stability and continuity; its regard for legitimate expectations; its non-retroactivity; and respect for the finality of judicial decisions. It also engages the Rule of Law principle of access to effective legal remedies for violations of legally protected rights. Legal certainty and legal continuity are not absolute requirements. Legal certainty means adequate legal certainty: legal complexity does not necessarily equate to legal uncertainty and while Parliament should always strive to pass clear and unambiguous laws it cannot eliminate the interpretive role of courts. Legal continuity similarly does not mean the law can never change, but such changes should be the result of democratic processes involving publication of, consultation on and debate and scrutiny of such changes, so that legitimate expectations are not unjustifiably infringed.

The Report considers seven Rule of Law issues raised by clauses 1 to 6. 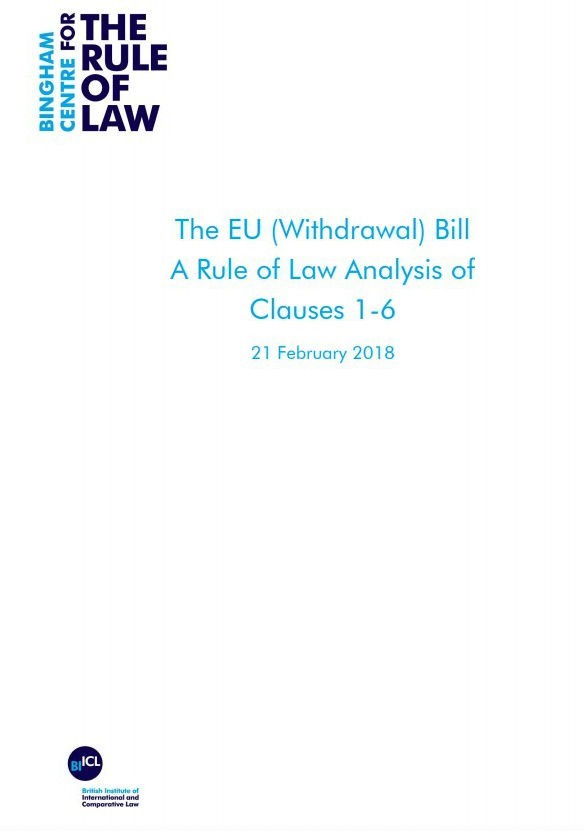