Alberico Gentili, the Italian jurist, is considered to be the founder of modern public international law. His work and achievements are closely studied by the Centro Internazionale Studi Gentiliani in San Ginesio, Italy, with whom the British Institute of International and Comparative Law and All Souls College, Oxford, organised this Conference, entitled, 'The History of International Law'.

The conference participants were recognised experts and writers in international law. Two inspiring presentations were delivered by Professor Benedict Kingsbury from New York University on the purpose of Punishment and the jus post bellum and Dr Amanda Perreau-Saussine from Queens' College of the University of Cambridge on Gentili and the Sources of International Law. Both speeches put Gentili's work in context with both the modern day issues of international law and the current academic stance on the subject. The speeches were followed by a memorial service at St. Helen's Church in Bishopsgate where Gentili is buried, after which the participants attended a drinks reception in the Locarno Rooms at the Foreign and Commonwealth Office followed by a dinner at the Italian Embassy. 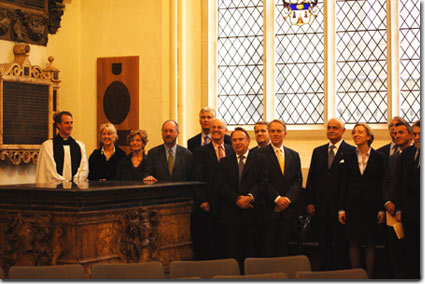 The conference was marked by good attendance, the presence of international guests and the vibrant debate that followed the speeches, particularly in questioning the work of Gentili in relation to contemporary methods and the accuracy of the current shape of international law on the issues of punishment and the legitimacy of reasons for initiating conflicts.