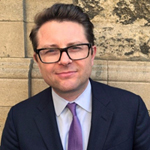 Ulysses is a New York-based lawyer with expertise in Business and the Rule of Law. He currently runs Telos Governance Advisers, which advises businesses, governments and not-for-profits on issues of governance, Rule of Law, development and human rights compliance. He was previously a senior associate in the New York office of UK-based law firm Linklaters LLP, where he practised as an attorney for 10 years, building a legal practice in international governance and development. He has worked with multinationals, state-owned enterprises, governments, NGOs and international organisations in more than 20 countries on 6 continents. Ulysses has also advised the UN Global Compact, including in relation to anti-corruption and global governance, and its Action Platform for Peace, Justice and Strong Institutions. He co-created and managed an annual conference at Oxford University on Advancing Good Governance in International Development. In 2016 he was recognised by the UN Global Compact as one of ten Global SDG Pioneers, for his work on peace, justice, governance and the Rule of Law.

In his new role, Ulysses will work with the Bingham Centre to develop research on concrete Rule of Law issues of practical importance to business. He will also be a key part of efforts to grow the Bingham Centre Business Network and to generate value for its members.

Murray Hunt, Director of the Bingham Centre, commented: "We are delighted to have engaged the services of such a recognised international expert on Business and the Rule of Law. The Bingham Centre has ambitious plans for advancing the Rule of Law worldwide, and to involve businesses directly in that work, including in the United States. Ulysses is perfectly placed, with his legal and business expertise and from his New York base, to help us make those plans a reality. He will direct and lead our five year programme of research into the really big Rule of Law issues which are of most interest and concern to the business community, in the UK, the US and worldwide."

Ulysses Smith, says: "The Bingham Centre's mission couldn't be more relevant in this challenging period for governance and the Rule of Law worldwide. I feel passionately that the business community has a great deal to contribute to, and gain from, the advancement of the Rule of Law. With its excellent researchers, ambitious new strategy, and growing Business Network, the Bingham Centre is poised to be a leader in this fast-developing area of critical importance, both in the UK and abroad. I am honoured and excited to lead the Centre's innovative work on these issues, and look forward to building an ever stronger case for greater business engagement on the Rule of Law."

Graham Vinter, Chair of the Bingham Centre's Business Network for the Rule of Law, said: "The Business Network is made up of businesses which have come together because of their shared interest in positively supporting the Rule of Law. We are proud to have made possible a sustained programme of independent research by the Bingham Centre into the strategic Rule of Law issues of most practical relevance to business by contributing to the Centre's core funding. I have every confidence that under Ulysses' expert direction that programme of work will help to grow the Business Network by demonstrating clearly the value of being a member and of collaborating to build Rule of Law capacity."

Ulysses has begun working with the Bingham Centre with immediate effect.