The Rt Hon Lord Judge PC, former Lord Chief Justice, delivered the fourth Annual Bingham Lecture at the Honourable Society of Gray's Inn on the evening of 3 May, 2017. 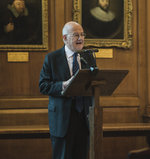 Lord Judge opened his lecture with warm words on Lord Bingham who embraced the rule of law 'with every fibre of his judicial being'.

Lord Judge spoke about the foundation of our constitutional arrangements being the sovereignty of Parliament. However, he went on to say that large amounts of legislative text, both primary and delegated, were going through parliament without detailed scrutiny. He expressed concern that, unless parliament awakens to this problem in the near future, 'by the time the Brexit process has finished its Parliamentary journey, we shall have irremediably cemented law-making by unscrutinised legislation into our constitutional arrangements'.

You can read the full transcript of Lord Judge's speech here. 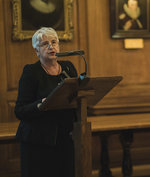 The event was chaired by former UK Supreme Court President and President of the British Institute for International and Comparative Law (BIICL), the Rt Hon the Lord Phillips of Worth Matravers.