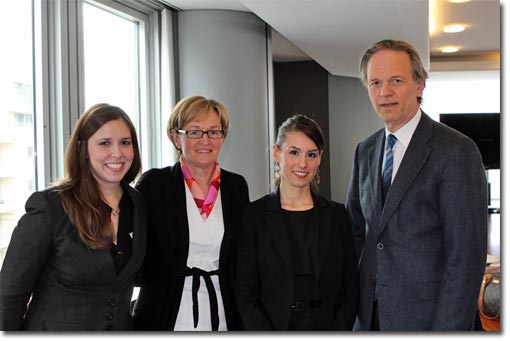 The need for a 'hard law' solution to tackle abuse of power by multiples against suppliers has been identified in a report emerging today at a working group meeting in the European Parliament chaired by Ireland East Fine Gael MEP, Mairead McGuinness. curriculum vitae

The report, 'Models of enforcement in Europe for Relations in the Food Supply Chain', examines the different mechanisms employed by Member States to put an end to unfair commercial practices in the relationship between retailers and suppliers.

McGuinness said: "In today's report the EU is urged to bring tougher enforcement measures into use, such as financial penalties for retailers found to be abusing their position of power. Sanctions could also oblige a retailer to reassess the manner in which it currently conducts business dealings and force it to alter its structures.

"The report proposes that a new Directive regulating business to business relationships (B2B) may be necessary, similar to the Directive on Unfair Commercial Practices which operates for consumer protection.

"Under the framework, a dedicated adjudicator or ombudsman would be created to oversee the food supply chain. This office would facilitate an anonymous complaints procedure and publish routine reports on the food sector to identify good and bad practice."

McGuinness said: "Soft law - voluntary codes of conduct - have not been effective where they have been tried. The hard law measures such as those identified in today's report are essential to stem current abuses of power and enable SME suppliers in particular to earn a decent and sustainable living."

She said the report comes at a very critical time as work continues within the Commission on the functioning of the food supply chain.

"This morning Agricultural Commission Ciolos told MEPs he would not be found wanting when he sees the outcome of the stakeholder group on practices in the food supply chain.

"That particular report is due for publication in June and a further report from the High Level Forum on better functioning of the food supply chain is expected at the end of the year. It must come forward with real proposals on ending unfair practices and on systems to monitor what is happening in the supply chain. I will also be keeping pressure on the commission to deliver on its commitments," she said.

Article 115 and 116 of the Treaty on the Functioning of the EU (TFEU): protection of the internal market gives scope to the commission to take action on this issue, McGuinness added.

"A comprehensive EU wide solution is not just preferable to individual member state actions, it is essential, given the global nature of the food supply chain," she said.

The Ireland East MEP, a member of the European Parliament's Committee on Agriculture, was joined by fellow MEPs and industry leaders at today's event.

Pictured at the launch of the report on Models of enforcement in Europe for Relations in the Food Supply Chain (l-r): Justine Stefanelli the Maurice Wohl Fellow in the British Institute of International and Comparative Law (BIICL), Mairead McGuinness MEP, Francesca Mancini of DG Enterprise at the European Commission and Bjorn Eidem Counsellor for Agriculture, Mission of Norway to the EU.