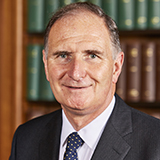 Lord Lloyd-Jones was born and brought up in Pontypridd, Glamorgan where his father was a schoolteacher. He attended Pontypridd Boys' Grammar School and Downing College, Cambridge. He was a Fellow of Downing College from 1975 to 1991. At the Bar his practice included international law, EU law and public law. He was amicus curiae (independent advisor to the court) in the Pinochet litigation before the House of Lords.

A Welsh speaker, Lord Lloyd-Jones was appointed to the High Court in 2005. From 2008 to 2011 he served as a Presiding Judge on the Wales Circuit and Chair of the Lord Chancellor's Standing Committee on the Welsh Language. In 2012 he was appointed a Lord Justice of Appeal and from 2012 to 2015 he was Chairman of the Law Commission.

Lord Lloyd-Jones is the first Justice of The Supreme Court to come from Wales.

The lecture will be chaired by the Right Honourable The Lord Phillips of Worth Matravers KG PC, President of BIICL. Lord Phillips is the immediate past President of the Supreme Court of the United Kingdom. He is a long-term BIICL member, and has been involved in BIICL activities, including its Bingham Centre for the Rule of Law.

There will be a drinks reception and networking after the Lecture, followed by the Annual Grotius Dinner.

Join in the conversation for this event @BIICL #Grotius2018

Please note that our events may be photographed or audio recorded. These materials will be used for internal and external promotional purposes only by the British Institute of International and Comparative Law. If you object to appearing in the photographs, please let our photographer know on the day. Alternatively, you can email BIICL Marketing Manager, Carmel Brown in advance of the event that you are attending.

This event will offer the equivalent of 1 CPD hours.