The Palestine Question in International Law

The Palestine Question in International Law

The question of Palestine has been a pivotal one for international law ever since the foundation of the United Nations Organisation in 1945. It remains so today. On 9 July 2004, the International Court of Justice gave its advisory opinion on the Legal Consequences of the Construction of a Wall in Occupied Palestinian Territory, where it ruled on some major international law questions concerning the applicability of the Geneva Civilians Convention of 1949 to prolonged occupations, as well as human rights law more generally. It confirmed the illegality of the Israeli civilian settlements established on occupied Palestinian territory and affirmed the continuing relevancy of the right of the Palestinian people to selfdetermination, which it considered an obligation erga omnes. The ICJ did not, however, rule on many of the international law questions pertaining to Final Status Issues which still need to be negotiated between the Israeli and Palestinian leadership if peace is to ever be accomplished in the Holy Land. 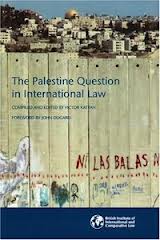