The period during the last few years of the second World War, and the few years after peace, was one of the most fecund in relation to innovation for critical human institutions, possibly in the history of the world.

Recoiling from the horror of the war, and responding also to the tragedy of the post-first World War period, where mistakes regarding economics caused enormous hardship, governments, statesmen and national lead-ers were determined to avoid a repetition of the events of the past.

The results of these efforts in the 1943-8 period were the establishment of the International Monetary Fund, the World Bank, and a provisional organization for trade, called the General Agreement on Tariffs and Trade (GATT).

Though Joseph Gold may not have been 'present at the creation' of the International Monday Fund, he surely was the key legal architect of its post-war development. In the area of international monetary law, Sir Joseph was more than the path-finding legal scholar of the post-war era; he often created and defined the parameters of the intellectual journey. In this respect, Sir Joseph was unrivalled as a public international law scholar.

This volume contains a wide range of articles dealing with issues of international monetary law, including the World Bank and the IMF, the concept of 'dollarization', the EMU and financial conditions in Africa and Asia, as well as personal tributes to the accomplishments of Sir Joseph Gold, to whose memory this series is dedicated. 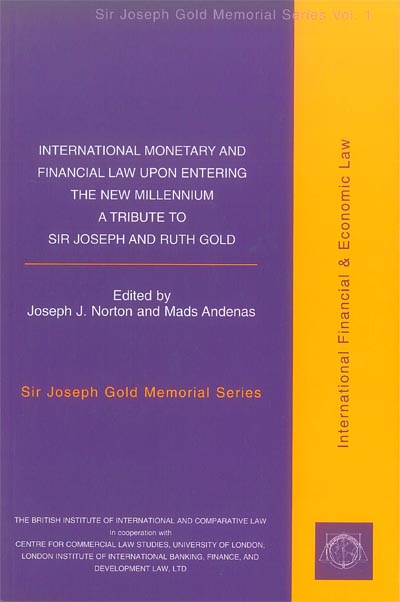