National courts have played a significant role for the promotion and application of human rights law, but little work has been done to analyse whether a similar role has been played, or could be played, in the field of international environmental law. This publication aims at filling this gap and is the result of a comparative study initiated in 1996 by the American Society's International Law's Interest Group in International Environmental Law (ASIL-IELIG).

The rationale of the study, its relationship to existing scholarship, the criteria for case selection, and a summary of the project?s findings are found in Daniel Bodansky and Jutta Brunnèe?s introduction. In the following twelve chapters various contributors analyse the role played by international environmental law in the national courts of a broad range of jurisdictions: Australia, Canada, the European Union, Germany, Ghana, Hungary, India, Italy, the Netherlands, Switzerland, the United States of America, the United Kingdom.

The results of this study do not paint a bright picture for the role played by national courts in the application of international environmental law, leading to the conclusion that international environmental rules are applied sporadically in national courts. The various contributors attempt to analyse and explain the reasons for such a situation, one of which has been identified as the lack of analysis and research. This book is an important contribution to raising awareness of the problem and will, it is hoped, contribute to an 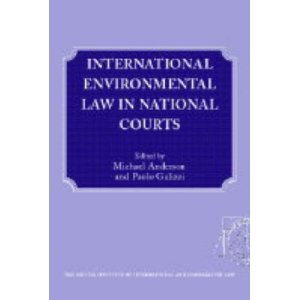