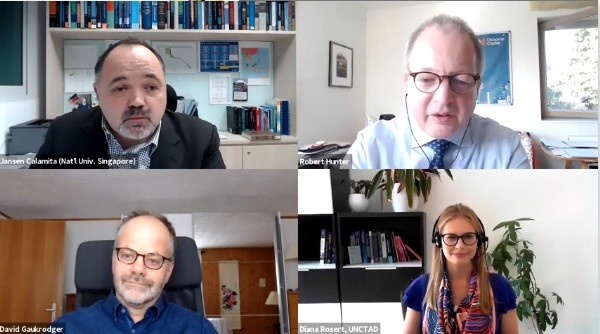 On 10-11 September 2020, the Investment Treaty Forum of the British Institute of International and Comparative Law (BIICL) organised a conference on State Regulatory Powers and Their Limits. The conference gathered representatives of states, experienced practitioners, and academics working on these matters.

Prof Yarik Kryvoi opened the conference and highlighted the importance of reassessing regulatory powers of states, particularly in the context of the Covid-19 pandemic and Brexit. He introduced Sylvie Tabet, General Counsel the Trade Law Bureau of the Government of Canada who delivered the keynote address.

Ms Tabet emphasized the need to reform international investment agreements because the context in which states drafted BITs has significantly changed. In the past, states established mixed claims commissions to resolve disputes related to expropriation and concession agreements and award compensation arising from particular events affecting the investor. The drafters of the ICSID Convention intended investment agreements (contracts), rather than treaties, to be the basis of most claims in investor-state disputes. However, history has proved them wrong.

The proliferation of advance consent expressed in treaties tested the limits of the system. It caused an explosion of claims arising out of a variety of regulatory measures - from the Philip Morris anti-tobacco measures to sovereign debt cases against Argentina. Often such disputes arise not from commercial disagreements but out of social unrest, economic crises, or environmental measures.

Managing conflicting interests of states and investors: scoping the issues

One of the speakers noted that in practice the extent of protections for investors, which international investment treaties (IIAs) guarantee may in practice be greater than what the state has asked for. States often argue for a narrower interpretation of IIA standards both in investor-state disputes and their treaty practice.

Recent model bilateral investment treaties from Columbia and the Netherlands provide for an objective definition of "investments". Besides, states will object to using the most favoured nation (MFN) standard to transpose consent to arbitrate between different treaties.

Further, states typically insist on investments being made "in accordance with the law", as required by many IIAs, and will argue against jurisdiction if the requirement was not observed. Finally, IIAs increasingly include strict procedural requirements, such as fork in the road provisions or notice requirements.

2. Differences between states towards regulatory freedom

Another speaker argued that differences between states play a role as well. The approach of states towards property, including that of foreign investors, can be divided into individualistic and communitarian. The former states are concerned with the impact on society's general interests and afford compensation to individuals when damage occurs. The latter have no tradition for setting limits to authority and might not be concerned with individual rights.

Although, broadly speaking, more economically developed states lean towards the individualistic model, the distinction is not clear-cut. Some states fluctuate. The USA was a communitarian state in the interwar period but gradually became individualistic.

The different regulatory agendas suggest that states do seek to differentiate the treatment afforded to investments of various nationalities. Speakers of the first panel noticed that such a discriminatory approach suggests a tendency to depart from the MFN treatment.

3. Case law on the subject

The panellists noted that states in investor-state cases persistently argue a narrow interpretation of international investment agreements. For instance, in Salini v Kingdom of Morocco criteria of investment are argued to extend outside of the ICSID Convention disputes which it initially concerned.

Furthermore, regulatory powers were upheld in circumstances where states banned a harmful additive to fuels (Methanex Corporation v USA) or prohibited the sale of harmful insecticides (Chemtura Corporation v Canada). In Philip Morris v Australia, regulatory measures targeting the tobacco industry were defeated at the jurisdiction phase, whilst in Philip Morris v Uruguay, the claims were defeated at the merits phase.

The right to regulate and the obligation to afford fair and equitable treatment (FET) to investors was addressed in Greentech Energy v Italy. The case suggests that specific assurances to the investor that the regulatory framework will not change may lead to liability.

In Total v Argentina, this point was upheld with regards to state contractual undertakings. Finally, the tribunal in Hydro Energy I v Spain held that changes to legislation are not prevented by the FET standard, provided they do not exceed an acceptable margin of change in pursuance of the public interest. The claims of the investor were partially upheld. One of the panellists noted that an "acceptable margin of change" is open to interpretation but the investor was not given additional assurances from the state in this case.

The second panel discussed the emerging trends and principles on the subject, asking how to correctly strike the balance between the right to regulate and investor protection.

According to one speaker, the FET standard does not outright oblige a state to change its legal framework, unless certain conditions are met. The conditions identified by tribunals, which may amount to an FET breach, include specific representations made to investors. These are frequently included in stabilisation clauses of concession contracts.

Blusun v Italy suggests that even implied representations in the form of the state of the law itself may suffice. The subject, however, remains open as evidenced by cases concerning the renewable energy regulation in the European Union. Future tribunals should address the issue further and answer how such a breach of FET arises.

Another speaker suggested that an emerging principle in this topic is the presumption against affording compensation to the investor. Cases of Marfin Investment v Cyprus and Magyar Farming v Hungary support this conclusion. The presumption could be strengthened if the state acted in the public interest and weakened where discrimination or a breach of due process occurred.

Another principle could be emerging from the case of Hydro Energy I v Spain. The tribunal seemed to suggest that the starting point for analysis is the perspective of the state. In addition, the award curiously imports the doctrine of margin of appreciation, which origins from international human rights law. Its use can be justified because investment tribunals apply a wide variety of different treaties, making consistent application of principles almost impossible. Hence, much like in human rights, the task of arbitral tribunals can be viewed as a balance between individual rights and state regulation.

New trends in bilateral and multilateral investment agreements: strengthening the state at the expense of the investor?

One of the speakers, using the United States as an example, presented three recent concerns of states towards investment law. Firstly, IIAs grant more rights to foreign investors than to the state's own nationals. Secondly, ISDS has a dissuasive impact on regulation, deterring governments from passing essential, bipartisan legislation. Thirdly, investment protection operates as a subsidy influencing making investments, departing from market conditions such as political risk.

The extent of investment protection, rather than economic considerations, determines whether an investment should be made. Scepticism towards ISDS also exists outside of the US, for example in Canada. Substitutes for ISDS might be preferable and include political risk insurance and contract-based arbitration.

One speaker presented two arguments against unscrutinised regulatory freedom. Firstly, there is a growing awareness of business due diligence and business responsibilities in making investments. Practice shows that modern concession agreements frequently contain clauses that allow for a margin of proportionate regulation. These are uncontested by investors, which are conscious of their broader responsibilities. An extent of regulatory freedom is hence a mutual interest. The issue is how to achieve that. Solutions could include a tighter definition of FET, binding interpretative statements, pre-qualification of tribunal members, or an appeal mechanism.

The approach is consistent with the fact that states do not have the same interests. The EU, for instance, is concerned with retaining trade hegemony, rather than investment promotion. This could foreshadow the end of the MFN standard as we know it.

There is an ongoing discussion at the World Trade Organisation (WTO) concerning the creation of a multilateral framework of investment facilitation. States could be bound to promote investments sustainably through, among others, improved transparency. The measures are aimed at making investments easier.

The question is whether such a framework would add value and whether the WTO is the right institution to do so. The aim seems to make it separate from ISDS. Further, the obligations under the framework are not to constitute "treatment" for purposes of MFN.

The WTO could become involved in creating international disciplines on investments. This would allow focusing investment facilitation on partnership, rather than dispute resolution. Equally, however, WTO cannot provide for the same substantive investment protections and it is unclear how this system would interact with the existing IIA commitments.

Force majeure, hardship, and the right to regulate

The final panel focused on the effects of the COVID-19 pandemic on state regulatory powers from the perspective of states and investors. Panellists recognised that regulatory freedom could be both a shield for the state and a sword for the investor.

A speaker noted that the pandemic will most likely arise first in contractual ISDS cases, based on hardship or force majeure clauses. The recent case of Joshua Dean v Mexico suggests tribunals will afford a high degree of deference to state regulatory authority. States have a constitutional obligation to safeguard public health and security, making hardship or force majeure arguments available. If so, in assessing the regulatory responses to the pandemic, tribunals should pay greater regard to long-term measures, rather than short-term immediate decisions.

Another speaker argued that the COVID-19 pandemic could have been fully foreseeable. States were warned of its risk by the World Health Organisation and the World Bank throughout the last two decades.

Force majeure is a difficult standard to prove. Sempra v Argentina made clear that for the principle to apply, a treaty obligation must have been rendered impossible to perform, rather than merely more difficult. For this reason, the speakers agreed that the particular wording of the treaty or contract will be relevant for the finding of a breach and the solution is a case-by-case approach.

A keynote address of José Manuel Gutiérrez Delgado, Head of the International Arbitration Department at the Spanish General Attorney's Office concluded the conference.

Mr Gutiérrez Delgado stated that tribunals respect the right to regulate in their decisions, an example being Micula v Romania. Circumstances outside of state control may require states to exercise their right to regulate in a different manner, for example in the context of the COVID-19 pandemic. Recent PV Investors v Spain case confirms that regulating to tackle unforeseeable circumstances cannot constitute a breach of investors' legitimate expectations, without further state assurances. States need to regulate to tackle the virus and protect public health. They have a right and an obligation to do so.

Further, ensuring stable conditions to the investment does not remove states' rights to maintain reasonable regulatory flexibility (AES Summit v Hungary). Under the doctrine of margin of appreciation, the right to regulate is granted a wide latitude (Electrabel v Hungary). It is important to balance state measures with the affected rights and interests, to avoid freezing of all regulation and granting unconditional protection of investments. The Energy Charter Treaty represents a good example of such balance.

The conference recording is available for ITF members free of charge in the members-only section.